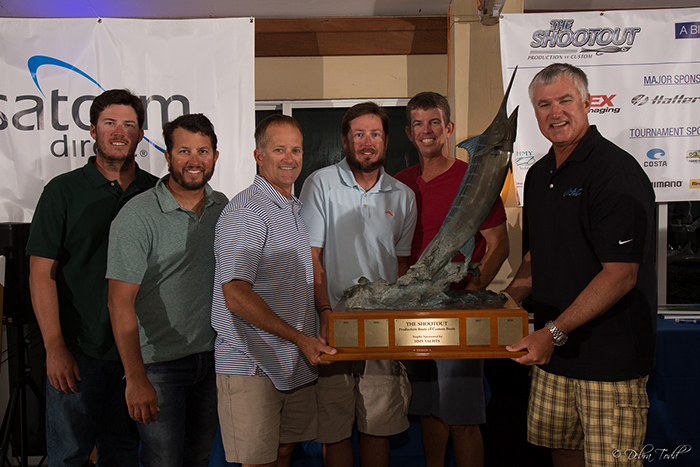 The Shootout's 27-team fleet of the most elite sport fishing yachts challenged the production and custom boats against one another in an all release format tournament hosted by the Abaco Beach Resort and Boat Harbour Marina, Bahamas on May 20-23, 2015

Of the 52 billfish (21 blue marlin, 19 white marlin and 12 sailfish) released during the three consecutive days of fishing, it was the WAVE PAVER, a 61' Garlington, who captured the overall Shootout title with two blue marlin, two white marlin, and two sailfish releases - securing the win for the custom boats over the production boats in this inaugural event.

Of the awards the Committee handed out on Saturday night, WAVE PAVER owner Jr. Davis accepted his First Place trophies for both Top Boat and Top Angler. In addition to beautifully engraved Shimano Tiagra 80w and 50w reels, the team also received a check in the amount of $55,980.00 for their prowess. Top Captain and Crew awards for the WAVE PAVER, which consisted of Captain Russell Sinclair, Jerry Owens, Garrett Van Orman and Brian Boyle, also received engraved Shimano reels and a check for $18,000.00.

Releasing one blue marlin each day of the tournament secured owner Scott Robins and Captain Chris Zielinski of WEEZ IN THE KEYS a Second Place finish for their team, receiving a check in the amount of $44,180.00, and Walter Shikany's Whiticar Boatworks' NEVER ENOUGH took Third with Captain Trevor Cockle leading them to one blue marlin, four whites and a sailfish release resulting in a $35,640.00 pay-out.

The largest Wahoo was weighed in at a hefty 62 pounds by STOP THE PRESS, followed by a 40.1 pound Mahi for HIT-N-RUN and a nice tuna harvested by SCOOTER, all of which received a check for $6,700.00 for the fun fish division of the tournament.

With good fishing and excellent weather, all the events were topped off by incredible food and service in the air-conditioned tent provided by the staff at the Abaco Beach Resort. Combined with the best of the best boats, owners and crew, The Shootout is sure to become one of the coveted worldwide premier tournament venues.

The Shootout perpetual trophy is currently on display in the lobby of the Abaco Beach Resort and Boat Harbour Marina in the Bahamas.