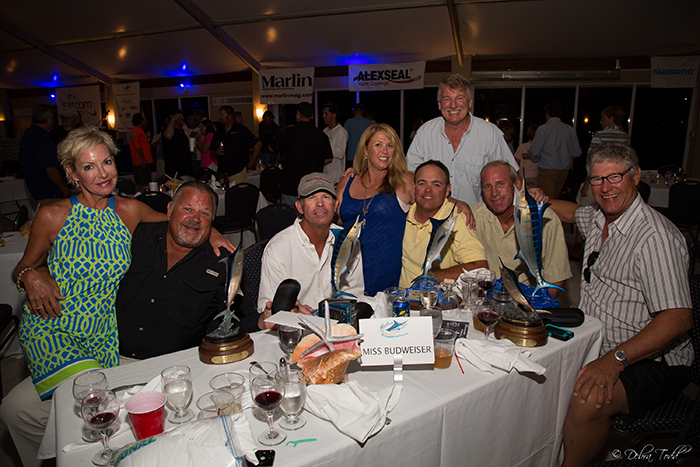 After a week break, the Skip's Tournaments Committee returned to the Abaco Beach Resort and Boat Harbour Marina, Bahamas to host their final tournament of the 2015 season on June 3-6.

Gorgeous weather prevailed as the 1961 model Rybovich MISS BUDWEISER defended her overall title as winners of the Abaco Beach Blue Marlin Invitational - proving yet again the old girl's still got it. Of the 15 blue marlin released during the three days' fishing, Captain Bill Davis managed to capture three of them, and also released a sailfish for good measure netting Michael Flannigan's team 1,300 points at the call of lines out on Saturday.

However, on day one it was Captain Sean Young on the COMMITTED that edged out the Island Boatworks COWPOKE by just 50 points to collect a cool $53,550 for owner John Lee and his team. COWPOKE Captain Mike Brady evened that score just 5 minutes after lines in on day two and quickly both those teams were playing catch up to the MISS BUDWEISER who released her only blue marlin for the day just ten minutes later - good enough to hang on to the daily win.

With the moon high and still practically full, the fishing on day three slowed and reports of big fish getting away upped the ante to bring one to the scales. The fleet had a good scare when the Paul Mann MA SHEILA, who had recently weighed a 628 pounder the week prior, called in her hook-up and was not heard from the rest of the fishing day. The fleet picked away at releases until the final call and Wally Whitley's American QUE MAS with Captain Travis Butters took their early morning blue marlin release to the bank for the day three win.

The First Place trophy, sculpted by artist Kent Ullberg and a framed original painted chart by Craig Smith were presented to the MISS BUDWEISER team of Michael Flannigan, Mike Wilcox, and Bill Kimball, as well as a check for $107,550. The Top Captain and Crew award went to none other than Mr. Flannigan's top-notch crew Captain Bill Davis and mates Jeff Binkle and Blake Chamlin, who deservingly left the stage with their $9,500 check. Mr. Whitley's crew consisting of Captain Travis Butters, Tyler Valles, Donny Lange and Robert Helm of the QUE MAS was happy to accept their $77,310 check for Second overall and Captain Shawn Truesdale on Mr. William Zelaya's Viking KRAKEN walked away with an outstanding payout of $17,280 for their Third Place finish.

The Committee and the IGFA would like to thank the 58' Merritt boat COMMITTED for their tenacity in landing a SAT tag in their blue marlin, and the Committee would also like to congratulate COWPOKE, A-FORD-ABLE, and KATHY JO for winning the game fish division.

Captain Smith was very pleased with the showing of teams and the comradery displayed at the Abaco Beach Blue Marlin Invitational this year and is looking forward to seeing them all in 2016.